"Wizards vs. Finkles" is the twenty-third episode of season three of Wizards of Waverly Place, and the seventy-fifth of the overall series. It first aired on July 30, 2010.

Harper's parents comes to town to audition for a gig as a train vaudeville act in Romania. Harper is completely embarrassed by them, while Alex is won over by them and agrees to join their act, while Harper gets to be in the annual Russo family photo, as both Alex and Harper take on roles in each other's families that they refused to fill themselves—Alex had objected to being in the family photo, and Harper had objected to joining the vaudeville act. However, Alex learns that being in the act is not all fun and games and soon wants out.

Incantation: Tell some jokes all old and clammy, then make me act all bold and hammy (Ham It Up Spell) • Effect: Gives someone the ability to act bold and tell old corny jokes 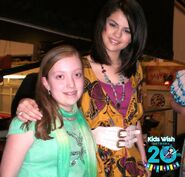