"Wizards vs. Asteroid" is the eighteenth episode of season four of Wizards of Waverly Place, and the ninety-ninth of the overall series. It first aired on August 19, 2011.

When it is announced that a huge asteroid is hurtling towards the Earth, the Russos decide to hide in the wizard world, but Alex, Justin, and Max change their minds and go into space to destroy the asteroid.

The episode starts in Tribecca Prep where Mr. Laritate tells Alex that she does not have enough credits to graduate. Alex then tries to run away with her file but Mr. Laritate manages to stop her from doing so. Her file is then kept in an 'Alex-proof' safe. Back at the loft, the Russos are watching a news report. NASA has speculated that an asteroid is about to hit the Earth that evening and that Earth is going to be destroyed.

Back in the lair, Justin reads the Emergency Wizard Handbook. It states that in the event Earth is destroyed, wizards and their immediate family are welcome to live out their life in the wizard world. Each wizard is permitted to bring one non-wizard with them. Harper goes with Alex while Zeke goes with Justin. Max decides to bring his pet starfish that has a missing leg.

They return back to pack their things. Justin gives each of them a duffel bag that is crucial for their survival. Max brings a bag of bags while Jerry brings a bag of cold cuts. He says that he is not going to let the asteroid gobble up the meat since he paid for it. Jerry filled Theresa's bag with mustard, lettuce, tomatoes, and onions. However, she opted for the photos of Alex, Justin, and Max. Alex decides to bring a television and a big bag of pretzels, saying that nothing in her life is going to change. Justin realizes that no one has brought anything useful.

Soon, another news report comes on and NASA has hit the asteroid with their deep-space buster missile. However, the missile failed to self destruct and the asteroid will still hit Earth. The Russos then leave Earth through the portal with Harper and Zeke. However, Alex comes back and says that they have to try to stop the missile and that they cannot just walk out on a world of people who are about to die.

Justin agrees to help, not wanting her to get all the credit for saving the world again. Max comes along as well. They use Justin's Captain Jim Bob Sherwood Country Cow Space Shuttle Conversion Kit to travel to space. Before they left, Max discovered that his starfish's leg grew back. They also bumped into Mr. Laritate who says that he is going to spend his last few hours in school with his beloved cowhide chair. The three of them take off and they land on the asteroid and look for the missile. The missile got stuck on T minus 9 minutes and 33 seconds and it required a manual override before it could self-destruct. Justin says that there are 100,000 possible combinations and it was impossible to try all of them since they were running short of time. Alex decides to key in 12345 and it was correct.

Justin tried to take a momento from the asteroid to prove that he was there when he saves the world. However, his leg got stuck and the missile was going to self-destruct in 8 minutes and 30 seconds. The three siblings continued to try to get Justin's leg out. The missile announced that it was going to self-destruct in 1 minute and 30 seconds and Justin told Alex and Max to leave without him or they were all going to die. Max made a comment that he wished Justin's leg could be broken off and grown back like his starfish. Alex turns Justin into a starfish and breaks his leg off. Justin's leg grew back and they had only 10 seconds to leave the asteroid.

Back at the sub shop, Harper, Jerry, Theresa and Zeke watch another news report. The asteroid was destroyed and Earth is safe. All four of them cheer but Theresa asks why they are not back yet. They started to feel worried about Alex, Justin, and Max. At this moment, the three of them walked in the to the sub shop. Another news report comes on and apparently a small piece of the asteroid will still hit Earth and its impact was projected to be in the Tribecca neighbourhood in Manhattan. Alex realizes that Mr. Laritate is still there and rushed to save him.

This episode was referenced in the A.N.T. Farm episode, ClairvoyANT. In this episode, Cameron predicted that an asteroid was going to destroy the Earth. Interestingly, the two episodes aired on the same day. 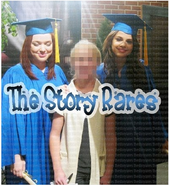