Back to page
View source

"Wizards vs. Angels" is the ninth and tenth episode of season four of Wizards of Waverly Place, and the ninetieth and ninety-first of the overall series. It first aired on February 18, 2011.

Rosie is an Angel of Darkness, and has been tricking Justin all along to make him evil. Alex finds out, with the help of Tina (a guardian angel in training trying to earn her wings) that Rosie is an Angel of Darkness. Justin crosses over to the dark side with Rosie, steals the "Moral Compass", and gives it to Gorog, so Gorog can turn the compass from good to bad, so that the world will be covered in darkness and every human being will be corrupted.

Meanwhile, Maxine is enrolled in Tribeca Prep, since she is participating in a "cousin exchange program." After her first day of school, Maxine laments that she has no friends, which leads Harper to insist Maxine have a slumber party (which is really what Harper wants because she has never had a slumber party), that eventually becomes a disaster, because of the Moral Compass being changed around. It is noted that Rosie was a guardian angel, but was corrupted and became an Angel of Darkness.

Alex and Tina go to the Dark Realm to save Justin. Alex

borrows a pair of wings from the guardian angels. Alex takes the Moral Compass and tries to turn it to good but Justin stops her, and then Rosie uses the bad angels and they "fly" up and when they land, Justin turns the compass to good. Tina and Alex take it and run. When Rosie and Justin kiss, Rosie turns into a good angel (with white wings), and Justin loses the dark wings.

Justin and Rosie return to the lair, where Justin breaks up with her, telling her that she needs to return to being a Guardian Angel. Rosie tells Justin to be bad a few times so she has a reason to visit and leaves the lair. At the Guardian Angel Dispatch Center, Alex and Tina return the Moral Compass and Tina is given her wings by Rosie. Tina then asks if her first assignment can be to watch over Alex but Alex refuses and flashes out.

Late at night, Alex returns to the lair and is surprised to see Justin there. He gives her back her wand, which he found in Washington Square Park in the mouth of a two-headed dog. She thanks him for finding her wand while he hugs her for saving his life and saving the world, with Alex mentioning that he gave up Rosie for the world as well. She then questions why the two of them always end up in scenarios like this, and Justin explains that it is because they are wizards.

In the end tag, the talking fruits begin to tell bad knock-knock jokes, prompting Jerry to start up the fruit blender. 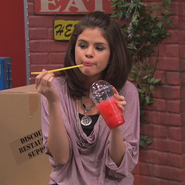