"Wizards Unleashed" is the twenty-seventh and twenty-eighth episode of season three of Wizards of Waverly Place, and the seventy-ninth and eightieth of the overall series. It first aired on October 1, 2010 as a two-part one-hour special titled Alex Saves Mason (released as Puppy Love in the United Kingdom).

Theresa and Jerry go on an anniversary trip to Connecticut and stay in a hotel, using a camera concealed in a teddy bear to check on the Sub Station. After Alex sees a painting dog on the news, she automatically assumes that it is Mason, and the three Russo siblings leave abruptly to find out more about this dog, leaving Harper and Zeke in charge of the Sub Station.

After a bit of investigation, Justin, Max, and Alex locate the mysterious dog and confirm their suspicions. They discover that Mason was 'saved' and held against his will by a family of country wizards, who agree to give Mason back to Alex on one condition -- they must give up their family portal. Alex agrees to make the exchange, unbeknownst to her brothers, and the country family arrives at the Russo's lair for the exchange, but Alex fools them by concealing their portal with an anti-magic realm. Because Alex broke her promise to the country family, the deal falls through and Mason reverts back to his wolf form.

Meanwhile, Zeke and Harper take care of the Sub Station and Harper, ready to take their relationship to the next level, tries to make Zeke kiss her. Jerry and Theresa witness all this from their hotel room, through the teddy-bear cam Jerry installed before leaving.

The Russo siblings return to the hillbillies' trailer home to search for clues on how to turn Mason back, and they discover that the key to his transformation is the magical jug band instruments the family keeps in their conspicuously labelled chest. They attempt to play the instruments, but Mason only transforms halfway and is stuck in his werewolf stage. Alex is still thrilled to have him back at first, but the thought of having Mason possibly stuck like this forever embarrasses her, so she forces him to cover his face whenever they go out in public.

At Zeke's party, Mason's cover is blown and Alex's humiliation is finally apparent to Mason, who becomes very disappointed and angry that she is embarrassed by something as superficial as his looks despite what they've been through. Harper has a talk with Alex about how she never minded being seen with Harper in public even though she wore eccentric clothing that others might not accept, so she should be more accepting of Mason's current looks as well. This makes Alex realize that her relationship with Mason means much more to her than what others may think, so she flashes herself into the elevator where Mason is and apologizes. They go back to Zeke's apartment, unaffected by everyone's stares and gawks and they dance, laughing at all the good memories they shared.

In the end, Justin finds the missing instrument, the mouth harp, and plays it, restoring Mason's appearance back to normal. 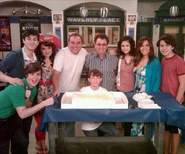