Who Will Be The Family Wizard

"Who Will Be The Family Wizard" (also known as Wizards vs Wizards or Wizards vs Each Other) is the 28th and 29th episode of season four of Wizards of Waverly Place, and the 109 and 110th of the overall series. It aired on January 6, 2012, and it's the series finale.

The Russo siblings — Alex, Justin, and Max — face a sudden and ultimate test to determine which one of them will be entitled to keep their wizardly powers. Meanwhile, Jerry decides to close down the family business.

During a dinner that Alex made for the family (without magic), Headmaster Crumbs visits to reveal that with this selfless act, the Russo children can finally have their Family Wizard Competition. Round one of the competition is a trivia round, in which questions related to magic are asked. Justin answers the first two questions to jump ahead 300 points, and Max answers a triple-answer and gains 250 points.

During the second round, Harper and Zeke appear. Zeke has accidentally smelled a purple substance in the lair that caused him to turn purple. This causes a griffin to kidnap him and Harper. Alex, Justin, and Max use their three time-outs to go and rescue their friends. They make it back, only to discover that they have been gone too long and have been disqualified from the competition.

They all return home, where the lair disappears and they all lose their magic, thus becoming mortals. Justin and Max are furious with Alex because of her insistence on saving Zeke and Harper resulting in them losing. Convinced that the loss of their powers has ruined the family, Jerry decides to sell the Sub Shop. The kids go for a few weeks without magic, during which, deciding that it is now all they have, they reopen the shop and slowly learn to work together as a family.

Suddenly, they are returned to the area of the Wizard Competition, where Rootie Tootietootie reveals that the griffin attack (which was actually meant for Professor Crumbs) and the weeks they went without magic were a test see if their family bond remains stable because of past experiences with the Russos.

The third round is where the kids are shown scenes from their life where the magic went away. Alex gives the correct spell to fix every problem all three times, pulling even with Justin at 300 points.

They enter the final round of the Competition, a massive labrynth. The first out of the maze will win. Justin makes it out first and is declared the Family Wizard. However, he decides he cannot accept this because Alex was about to get out first: Justin had gotten stuck on a tree root and Alex, near the exit, came back to help.

Therefore Justin gives Alex the position of the Family Wizard. Professor Crumbs, proud of Justin's decision and his high intelligence, declares that he is going to retire as Headmaster of Wiz-Tech and declares Justin the new Headmaster, granting him full wizard powers. Jerry thus decides to one day pass down the Sub Shop to Max, which he happily accepts. Alex points out that the family is finally all happy at the same time and the series ends. 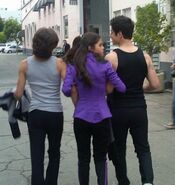