"Three Monsters" is the fourth episode of season three of Wizards of Waverly Place, and the fifty-fifth of the overall series. It first aired on October 30, 2009.

While taking his Monster Hunting course, Justin gets a reading of Level 6 monsters being on Waverly Place, being 3 of them. After reporting the monsters to the Monster Hunter Council, he finds out those monsters are Juilet and her parents!

Meanwhile Max's conscience makes him study spells, do laundry and other chores his parents can't get him to do. This results in Theresa paying more attention to Conscience and ignoring Max. 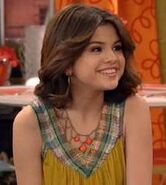 Add a photo to this gallery
Retrieved from "https://wizardsofwaverlyplace.fandom.com/wiki/Three_Monsters?oldid=61667"
Community content is available under CC-BY-SA unless otherwise noted.