"Third Wheel" is the fourteenth episode of season three of Wizards of Waverly Place, and the sixty-sixth of the overall series. It first aired on April 30, 2010.

Harper has trouble remembering something about Stevie, and under Jerry's advice, Alex jogs her memory using magic. Harper regains her lost memories and notifies Alex that Stevie is a wizard. The new revelations causes Alex and Stevie to become the best of friends and go on magical adventures together, leaving Harper by herself. Harper, upset that she has lost Alex to Stevie, relegates herself to being the third wheel. Meanwhile, Justin and Zeke are appointed to the homecoming committee and try to build their own float. 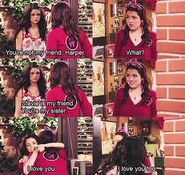 Add a photo to this gallery
Retrieved from "https://wizardsofwaverlyplace.fandom.com/wiki/Third_Wheel?oldid=61672"
Community content is available under CC-BY-SA unless otherwise noted.