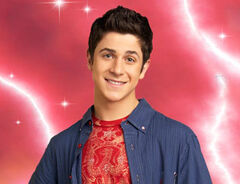 Justin Venchenze Pepe Russo or Justin is the eldest child in the Russo family. At 16, Justin is an overachiever and exercises restraint over his powers as he tries to fit in at school. He enjoys reading comic books and learning about subjects in school. As the more mature sibling, Justin often finds himself cleaning up after Alex and Max's mishaps. He's also gained the unreciprocated affection of his sister's best friend Harper. He is left handed.

We learned in Episode 105: Disenchanted Evening that he's allergic to cinnamon. Justin is shown as a Great Student in Wizard Class and School. His sister Alex normally calls him a Kiss-Up to the teachers and she is always making fun of him in any possible ... (more)

Retrieved from "https://wizardsofwaverlyplace.fandom.com/wiki/Template:Featured_Article/Justin?oldid=7914"
Community content is available under CC-BY-SA unless otherwise noted.