"Smarty Pants" is the first episode of season two of Wizards of Waverly Place, and the 22nd of the overall series. It first aired on September 12, 2008.

After she gives Nellie a hair-raising buzzing shock accident, Alex joins the Quiz Bowl, an academic game, with her best friend Harper. To give the team an edge in the Quiz Bowl Competition, she wears the "Smarty Pants," which gives a superior knowledge on everything there is to know. However, her knowledge might ruin her friendship with Harper. Meanwhile, Max and his friend, Alfred, attempt to sell bottled water from Tribeca Prep's water fountain since everyone liked how the water tasted but they then realize they could refill the bottles from the fountain.

Harper walks over to Alex to share her excitement over the Quiz Bowl. Harper then also says that she is joining the Quiz Bowl so that she could get a new reputation in school, not just as the 'fashion dynamo' but as the 'girl with the brains'. A new student, Dean, shows up in school and Mr. Laritate engages him to help set up for the Quiz Bowl at the gym. Alex volunteers to set up for the Quiz Bowl to get to know Dean. Dean proceeds to rewire the buzzers and left the last one for Alex to do. He does not realize that Alex was unclear about the instructions.

Harper and her team turn up at the gym at that time to practice their buzzer skills. Nellie pressed the buzzer that Alex rewired and was mentally traumatized due to an alight electric shock. Nellie withdrew from the Quiz Bowl and Harper's team has to forfeit, which would lead to Justin's team winning. Alex learns that the opposing team was Justin and decides to replace Nellie.

Alex puts on the smarty pants for the Quiz Bowl and Dean shows up at the gym. Mr. Laritate asks the first question and Alex answers. Harper was delighted that Alex studied. However, Alex started answering all the questions in the first round which made Harper start to feel unhappy. Harper confronts Alex after the first round. Harper tells Alex that she only wanted a new reputation and to look smart in front of everybody. Alex promises not to interfere during the second round and Harper walks off. Justin asks Alex about how she studied but realizes that she was wearing smarty pants. Justin decides to tell Mr. Laritate about but realizes that he cannot.

Back at the loft, Theresa asks Max about the fountain water and tells him that he has to sell something with it so that it will be value for money and that people will buy it. Theresa also talks to Max about the dirty canary song he was writing. Max tells Theresa that he needs help writing the second verse and they write it together.

During the second round of Quiz Bowl, Alex did not keep to her promise and continues answering questions. Harper gets really upsets and starts to walk off. Alex stops Harper and she removes the smarty pants. However, because she had the pants on for too long, she develops skeletal legs; Alex and Justin quickly leave the gym. Harper looked for Alex after the Quiz Bowl ended and they won. Nellie stepped back in after Alex left. Harper wants to give Alex a skeleton shirt to go with the 'skeletal tights'. Theresa walks out of Mr. Laritate's office and said, 'It's funny. Your principal started talking about you and then he got a phone call about a dirty canary song sweeping through the seventh grade.' Alex tries to point out that it was Max but Theresa tells her to keep quiet and they quickly leave school. 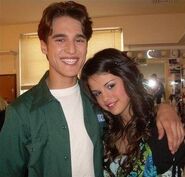