Rock Around the Clock

"Rock Around the Clock" is the 25th episode of season four of Wizards of Waverly Place, and the 107th of the overall series. It first aired on November 4, 2011.

The Russo’s home and business are in jeopardy after a landlord who bought the building from Jerry’s dad in the 50′s threatens eviction, so the Russo’s go back in time to save their home and the Sub Station.

The Russo family learns they are being evicted from their apartment and the Sub Station when Lenny Hune, the owner of the building, informs them he plans on selling the building. Jerry decides that they can find a new home, but they won't be able to find a new wizard lair. If the family leaves the Waverly Sub Station, the lair will disappear, and they will lose their connection with the wizard world.

Justin attempts to file a claim with the wizard lair relocation service, but the family is less than enthusiastic about having to fill out a 4,000-page application. Alex suggests going back in time to convince Grandpa Russo not to sell the building. Using a time travel mechanism that Jerry had kept hidden the family and Harper set their destination for the year 1957. Justin doesn't agree with the plan because he thinks there could be serious consequences.

The Russos and Harper land in the year 1977 because Justin accidentally shifted the dial in the time machine. The Sub Station looks more like a dance club than a diner. They take a few minutes to dance before resetting the time machine to 1957 and attempting the trip again.

Having finally arrived in 1957, they convince Grandpa Russo to not sell the Sub Station to Lenny Hune. Believing they've done what was necessary, they return back to the present time. Unfortunately, the Sub Station appears abandoned, the lair is gone, and they realize they've forgotten Harper! The family returns to 1957 and find Jerry's dad packing up because the Sub Station has gone out of business.

Harper has enrolled in Tribeca Prep in 1957 in order to not ruin her perfect attendance record. She's become the most popular student in the school, and she uses her popularity to get everyone to go to the Sub Station. Meanwhile, Max makes new friends, show them an MP3 player, and accidentally shows them

the "high-five" 20 years earlier which is now called the "Max".

The Russos return to present time and are happy to find the Waverly Sub Station still in business and the lair where it should be. They get nervous when they find a janitor named Lenny Hune Jr., and think that his dad owns the building, but are relieved to find out that Lenny Hune Sr. just owns the janitorial service. The only thing that appears to have gone wrong, is that they've forgotten Harper again!

The family travels back to get her but accidentally go back to 1977 again. A song Justin likes starts to play, and the family starts dancing, and decides Harper can wait. 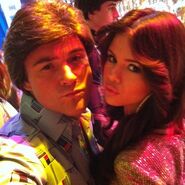