"Racing" is the fourth episode of season two of Wizards of Waverly Place, and the 25th of the overall series. It first aired on October 12, 2008.

Alex uses the restoration and upcoming race of Jerry's junky old car as an opportunity to develop her relationship with her "gear head" crush, Dean. Meanwhile, Max orders a mind-reading kit.

Alex walks past Dean and his posse four times to try and get him to notice her, but it doesn't work, and Alex says it's hard because Dean knows she likes him. Harper says she should act cool around him as she does with Justin, promptly freaking out when she sees him. Trying to talk to Dean, Alex goes over while he and his friends are talking about working on a car for a race, but Alex's attempts at involving herself in the conversation. Meanwhile, Max has ordered more junk from the back of Wizards Weekly, this time an invisibility poncho which doesn't turn the wearer invisible, but the poncho itself. Justin puts it on the shelf with the '3-D' glasses, and the transportation ruler, which knocks out anyone nearby when it's used. Max doesn't listen and orders a mind-reading kit.

In the Sub Station, Theresa tries to convince Jerry to donate his old car to charity, but Jerry won't. Alex sees Dean come in, and she panics, she makes Dean a salad with hot red pimento sauce and asks him if she could talk to him alone. Justin tells her not to do that, as it'll make him think he's in trouble and says he should find a common interest, like cars. Harper takes this advice and starts talking about an action figure she found and asks him out to dinner. Alex goes over to Dean, and they talk about how he doesn't have a car to race. Alex mentions her dad's car, and Dean tells his friends he's working on the car by himself. Meanwhile, Max's mind-reading kit arrives, and Justin says it's just a toilet tube with glitter and macaroni. When Max gets as close to Justin as possible, he can hear his thoughts. Dean is looking at the car, and Alex tries to ask him what she thinks of him, but chickens out. When Dean is about to say something to Alex, Jerry interrupts to come down to ask how the car is. Alex tries to get Jerry to leave, but Zeke and Justin come down to say they're now joining the cross country team.

Next Max comes down saying he lost his bouncy ball. Then Theresa comes down to do some laundry. When Dean gets the car working, everyone gets in the car, leaving Alex alone. Harper says it's too bad Alex can't read his mind, prompting Alex to steal Max's mind-reader. She reads Justin's and finds out he didn't make the cross country team. At the race, Alex says she'll talk to Dean alone at the pitstop, but it doesn't work as it's

too noisy, and he has to leave as soon as the car is fixed up. Alex uses the transport stick to get in the car with Dean, knocking him out when she gets there.

Alex takes over the driving and finds out he's thinking about getting Joey a girlfriend. When he's awake, Alex says she likes him a lot, and Dean says he likes her too, and that's why he said he wanted to work on the car alone, and that he didn't want to tell her family to leave as it would be a bad first impression. They end up driving into a giant Sloppy Joe. Showing that they are now in a relationship. Later Justin and Alex are talking on the terrace, and Justin says he's disappointed Dean likes Alex, as he wanted her to get a boyfriend he could intimidate if he got out of line. Alex sprays Justin with water to make him look sweaty as their dad thinks he's at cross country practice, so Justin uses the transport stick to knock Alex out. 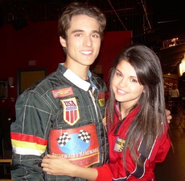