"Positive Alex" is the tenth episode of season three of Wizards of Waverly Place, and the sixty-second of the overall series. It first aired on February 26, 2010.

Alex decides to ask out a guy at school named George, who is the conductor of the school band, but he does not find her attractive because of her negative attitude and demeaning behavior. Determined to get George to go to the homecoming dance with her and like her, she uses a magical marker on herself to become a positive person. At first, things go great and George actually shows interest in her, but her new optimism begins to cause issues when the cheerleaders begin to boo at the opposing team, which 'Positive Alex' finds a very negative thing to do, so she suggests that they should all cheer for everyone. In the end, George refuses to go out with her because her cheering for the opposing team causes their school to lose, which evidently shows that her positive attitude was getting out of hand.

Meanwhile, Justin joins the basketball team in an attempt to create the best memories for his high school senior year, and gives Max a camera to film all his accomplishments on the team. When Justin asks Max to view the video, it shows that all he recorded was nonsense and nothing of the actual game.

Magical Marker — Can make what you write on your arm come true. 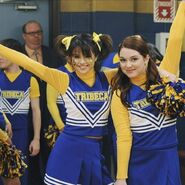