"Moving On" is the twenty-sixth episode of season three of Wizards of Waverly Place, and the seventy-eighth of the overall series. It first aired on September 10, 2010.

When Justin fails to get over Juliet, Alex transforms Harper so that she looks like the young version of Juliet. Justin is delighted to see his soul mate again, until Harper, as Juliet, try to make him move on. In the end, Justin decides that he is ready to date again and chooses to start the next chapter of his life. The real Juliet has actually been watching Justin this whole time, and, in the end, it shows her watching Justin from afar, smiling.

Justin cannot get over Juliet. One day, he is working in the Waverly Sub Station and a girl named Sara walks in. She looks similar to Juliet and reminds him of her. She tries to ask him out, and he turns her down. Alex walks up to Justin and yells at him for not welcoming her. Justin says he's not ready, and that he never will be. He reveals that it is the day before Juliet's 2,194th birthday, and Alex responds by referencing Juliet's transformation to her true age in "Wizards vs. Werewolves". Justin exits up the stairs, and Alex talks to Harper about her method for "ripping off the bandage" with her past relationships. Max enters through the door carrying a tent. He talks about his plan to go camping in Central Park, but Alex becomes sarcastic.

Justin is standing outside the station, looking through a box full of pictures of Juliet. He thinks he sees her walk by, and runs to find her nowhere. After a short talk with Max, Harper, disguised as Juliet, regains his attention and walks out of the shadows. Justin jumps up excitedly and hugs her. He asks her how she became young again, and she responds by saying "lollipop", "pizza" and "cream cheese". Justin says he knew that he shouldn't have let go, despite what everyone told him. Harper tries to convince him that the reason she "returned" was to tell him that letting go was okay. They agree to meet in the boat-pond that night for a boat ride.

Max and Jerry are talking about yodeling when Justin runs into the station yelling that his true love has returned. His family looks at him strangely. Theresa asks what he could possibly mean when Alex and Harper burst in excitedly. Theresa talks to Justin about how this doesn't make sense, and how Magic must have been involved. Harper runs up, trying to convince Justin that he should move on (what she said disguised as Juliet.)

Justin and Juliet (Harper) are standing by a boat near a shore. She tries once again to convince him to move on. They are about to kiss when Harper reveals her "true identity." He then begins yelling at her. She says that she was "just trying to help," and retells the story of the episode thus far from her point of view, including a revealing conversation between her and Alex in the lair, where they create a plan to help Justin. Justin realizes that it's time to move on, and kisses Harper on the cheek. He changes her back, and Max is revealed hanging from a pine rooster tree. Alex enters reclining on a raft, laughing at Max.

Later that night, Justin is on a date with Sara on that same shore. He tries to carry her into the boat but ends up falling down---although they laugh about it. During that time, Justin admits to Sara that while there's a part of him that will always love Juliet, he needs to move on and decides to move on with Sara, which makes her happy.

The very end of the episode shows the real Juliet, in her 2,194-year-old form, who was presumably watching Justin the entire time and is shown smiling at Justin's milestone from some bushes nearby. 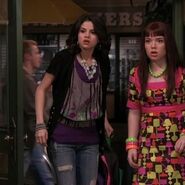 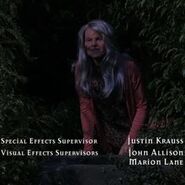