"Monster Hunter" is the third episode of season three of Wizards of Waverly Place, and the 54th of the overall series. It first aired on October 23, 2009.

After Justin masters his 5000th spell, Mr. Stuffleby comes by and announces that Justin has officially completed his wizard studies, and is now eligible for higher education in the form of an independent study. Alex is told that she has mastered only 100 spells in comparison and that she and Max are so far behind, they do not have a chance.

Justin takes up monster hunting and scours the city looking for the easiest monster, a Level One monster known as a Fakeahorseus. Alex asks Harper to help her study and the two go through Justin's room, where they find out that Justin recites spells in the form of songs to help him remember them. As the song is catchy, Alex decides to adopt this study method. Max attempts to convince Alex to aid him sabotaging Justin in order to push the wizard competition in their favor. However, Alex tells Max that Harper is acting as her conscience and guide and suggests that Max listens to his conscience for once.

Max heads to the lair and goes through the spellbook until he finds the spell for 'conscience guide'. Not wishing to read the instructions, Max separates his conscience from his body, giving it life. Conscience berates Max for his foolishness as Max, dubbing him Roy, asks for suggestions on sabotage. As Conscience tries to explain that Max's actions would be no better than the monsters in Justin's study manual, Max misinterprets his words and releases the monsters into the city. He then decides to blame Alex for it.

Justin catches the Fakeahorseus but is surrounded by all the other higher ranking monsters. Alex, irritated to be interrupted during her studying, heads to Justin's rescue and saves him, and remarks on how she is like him now. Nonetheless, she is not irked at the notion of being studious like Justin, as she believes it makes her a step closer to catching up to him. Meanwhile, Max wrestles with his conscious.

The episode ends with Selena Gomez, David Henrie, Jake T. Austin and Jennifer Stone asking guest star Moises Arias to take a picture of them. They reveal that they have asked all the previous guest stars, namely Jeff Garlin, Misty May Treanor, and Dwayne Johnson, to do the same thing. After Moises takes the picture, the main cast leaves, leaving a confused Moises to sit back in his chair. 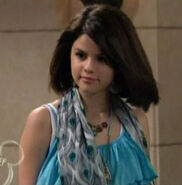 Add a photo to this gallery
Retrieved from "https://wizardsofwaverlyplace.fandom.com/wiki/Monster_Hunter?oldid=61666"
Community content is available under CC-BY-SA unless otherwise noted.