The two first met in art class, where Mason complimented Alex on her artwork and fell in love at first sight. Later, Alex realized that dogs were his muse, and after laughing at this, he became upset towards Alex. She then used a muse shell to make Mason change his mind, but it didn't go well. She soon undid the spell after a while, and while the mural of her was washing away in the rain, Mason kissed her for the first time.

In the Wizards vs. Werewolves special, Alex and Mason fell more and more in love but didn't reveal their true race to each other. Alex started to suspect that Mason was cheating on her when he kept leaving their dates early, and hatched a scheme with Harper to follow him. Both girls soon ran into him, and despise his pleas for them to leave, saw him transform into a werewolf. Alex then revealed she was a wizard to him, although Harper tried to make her look desperate.  Soon Alex, seeing how upset her brother Justin was about losing his girlfriend, Juliet to an evil mummy, convinced Mason to go looking for her with his dog-like smelling ability because Alex wanted Justin to be as happy as Mason and her were. They travelled to Transylvania, where the evil mummy was defeated by Alex and Justin's younger brother Max. When Mason discovered the vampire he was hunting down was his ex-girlfriend, he impulsively told Juliet he still loved her. Alex took a magical necklace that glowed when the wearer was in love with the person who gave it to them and threw it away, confirming their breakup. Juliet then told Mason what they had was great, but Justin was her soulmate. Mason then convinced Alex to go back to Transylvania with him to prove he loved her with the necklace. After a fight with Juliet and Justin, Mason proved that he loved Alex. But since during the fight Mason scratches Juliet and Juliet bites Mason. When a werewolf scratches a vampire they lose their vampire powers and when a vampire bites a werewolf they turn into a full wolf. Mason runs of into the woods after turning into a wolf.

In Wizards Unleashed, Alex sees a news report about a painting dog and thinks it's Mason. Alex, Justin, and Max go to the home of the people who have Mason. The dog is Mason but the country wizards who have him will only trade him for a portal. Alex tricks the other wizards and gets Mason back, but he is in dog form. They turn him back later in the episode.

In Wizards Exposed, the Russo Family are taken by the government who knows they are wizards. The family tries not to tell them anything but Justin spills after thinking he is saving the world. The exposition of wizardry was predicted in the 16th episode of season 2, "Future Harper", where H.J. Darling stated that people in the future already know about wizards because someone had a big mouth. It was assumed to be Max but actually turned out to be Justin. Mason is later captured after trying to help the Russo's, as well as other wizards. Alex, Mason ,and the other Russo's escape but have a lot of walking to do in order to get home. This is the last episode of Season 3. When the fourth season starts Alex Tells the World, the Russo's have just arrived back at the sub station. Mason carried Alex home most of the time. Alex thinks exposing wizards will make people want to save them from the government. She and Mason call over reporters to do so. The whole thing turned out to be a wizard test by Professor Crumbs. Justin and Alex are tried in Wizard Court for trying to expose wizardry and Mason tries to defend Alex in court but Justin and Alex are still demoted to level 1 wizards.

In Alex Gives Up, Alex decides to quit the wizard competition to be with Mason. But she is told by Chancellor Rootie Tootie that werewolves and mortals can't be together because the werewolf always ends up eating the human. They change his mind by taking him on a fancy boat ride with the rich, magical Cucuy's. Lisa Cucuy likes Max because he is supposed to be the family wizard. When she finds out Mason is a werewolf, Lisa wants him instead. Alex gets jealous even though Mason isn't interested in Lisa. Alex embarrasses Mason so he will wolf up and the Cucuy's will be scared and won't let Lisa date him. Chancellor Tootietootie sees Mason is uncontrollable since he is a werewolf and decides Mason and Alex have to break up, so they do. The break-up was also predicted in Future Harper where H.J. Darling asked Alex if Mason had broken up with her yet, many episodes before Mason and Alex even met. In Journey to the Center of Mason, Alex's ex-boyfriend Dean wants to get back together. Alex says no but they hang out and really hit it off. Mason get jealous and eats Dean. Alex, Justin, and Mason go into Mason's stomach with a little submarine to get Dean out.

Alex notices Mason only thinks about her when they travel through Mason's brain. When Dean is out, he asks Alex to be with him again. Alex rejects Dean's offer to get back together saying that she was in love with Mason. When Dean leaves, Mason tells Alex that they can't be together she tells Mason that she's going back into the wizard competition and win, so they could be together.

In Meet the Werewolves, Alex questions why she hasn't met Mason's parents yet, and Mason then tells her that his real parents don't approve of Mason dating anyone other than werewolves. Mason convinces Alex to pretend to be a werewolf and she acts very obnoxious, but to Alex's disappointment they turn out to like her. Eventually, Alex tells them that she is a wizard and Mason's parents don't approve, but they stay together.

In the episode, Beast Tamer, Mason is ignoring Alex and didn't want to spend time with her. So Alex goes to the Beast Bowl to see a beast tamer named Chase Riprock, who tried to kiss her earlier while giving her a tour of the stadium. Harper confronts Mason at school while he's working on something, and Mason says he's working on an anniversary gift. After getting upset that Chase is trying to steal his girlfriend, he takes the gift to the Beast Bowl in the middle of the chaos. He saves Alex from the beast and after seeing a romantic sculpture that Mason made for their anniversary.

In Wizard of the Year, Alex wins the Wizard of the Year Award and when Chase comes to congratulate her for winning, reporters make up a story that they are dating, which is untrue but Mason believes this and storms out. At the awards ceremony, Mason doesn't show up, so she hangs out with Chase. Mason arrives late and sees Chase and Alex laughing, so he gets jealous and turns into a full werewolf, and attacks Chase. After causing a big chaos at the ceremony, Alex has to choose between Mason and Chase, and she chose neither. The end credits show Alex and Mason on their balconies, staring at the sky, thinking of each other. In Wizards of Apartment 13B, Alex wants to start fresh from her breakup and rents an apartment on a secret 13th floor for the wizard world with Harper. But when Alex discovers that Mason is her neighbor, he tries multiple times to get back with her, and Alex is uninterested. He tries using Alex's old training wand to open Alex's heart, but it backfires.

In Ghost Roommate, Mason tries to make Alex jealous by going out with her and Harper's ghost roommate Lucy, when Alex suggests she should find someone new after her breakup. Alex gets jealous but denies it, and she finds Lucy's old boyfriend Donnie in the Bermuda Triangle. Harper is surprised by the fact that Alex did math, emphasizing that she is so jealous. Alex takes Lucy to the Bermuda Triangle and they find Donnie, but Alex can't get back because magic doesn't work there. When Mason finds out, he borrows shorts from Justin, so magic can work to get back. When he arrives, they have an ugly contest for the shorts, flirting without realizing it. Lucy then adds to Donnie, "They are so in love."

In Get Along, Little Zombie, Alex and Mason decide they should get back together after dancing in a rodeo event, which flew sparks. In Wizards vs. Everything, Mason gets turned to the Dark Side by Gorog, an evil wizard, and when he asks Alex to join him, she agrees, but only because it is part of a plan. After she, Justin, and Max defeat Gorog once and for all, Mason and Alex remain happy. During Who Will Be the Family Wizard?, Mason cheers on Alex in the Family Wizard competition, whether she's winning or losing. They nearly break up when Alex is not named the Family Wizard at first, but when Justin admits that Alex should be the Family Wizard because she helped him during the competition, Alex is made a full wizard and reconciles with Mason.

The Wizards Return: Alex vs. Alex

In "The Wizards Return: Alex vs. Alex", Mason and Alex are still together nearly a year later. Mason thinks Alex is cheating on him with Dominic, a charming but evil wizard, but then later finds out she wasn't and saves her from the death penalty and Dominic, and they stay together. 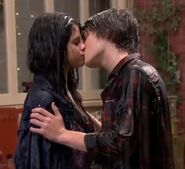 Kissing in the rain! 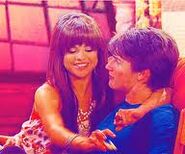 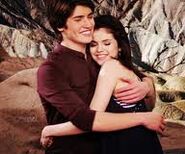 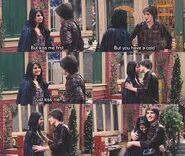 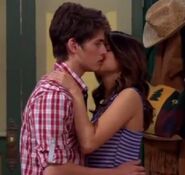 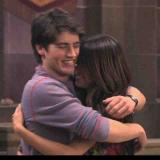 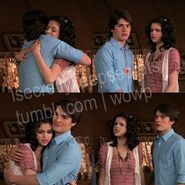 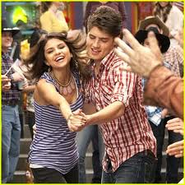 Mason and Alex
Community content is available under CC-BY-SA unless otherwise noted.
Advertisement