"Marathoner Harper" (alternatively titled "Marathon Helper") is the seventh episode of season three of Wizards of Waverly Place, and the fifty-eighth of the overall series. It first aired on December 4, 2009.

After Harper wins a marathon, she discovers that Alex has used magic to help her win every competition since they were very young. Upset that she never really won anything on her own, Harper decides to let Alex recreate contests from the past in order to have the opportunity to win without the aid of magic. Meanwhile Justin decides to enter the marathon so he can be the first Russo to win an athletic trophy. 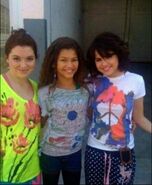