A magic wand is somewhat a source and a tool of a Wizard's magical powers. They are what is used to channel magical spells. During wandless magic, sometimes most spells can be less effective or less as strong. It turns out that if your wand is broken, its two halves can be placed together and still perform some type of magic.

Wands are magical artifacts that enable wizards to channel raw magic from the Wizard Power Plants. By doing so, wizard fuel their own powers and enhanced the potency of their sorcery.

Each family of wizards has a "Family Wand", which is much more powerful than an ordinary wand and only a wizard who is a direct descendant of that family is able to use it.

The Russo's Family Wand is showed in Wizards of Waverly Place: The Movie where it is initially used by Justin and Alex then accidentally invokes its power to create an alternate reality where her parents never met.

The wand of Rinaldi family, currently in possession of Felix, is recognized as the most powerful wand in existence.

Training wands are low-level wands that allow young wizards to practice magic before they are old enough to use official ones. Each training wand displays one power to ease the complications.

Training wands can be used by anyone, even mortals.

Harper is given one with opening capabilities when she pretends to be a wizard to live in a hidden apartment.

Alex's wand is made up of a deep red colored shaft with a black handle at the top of the wand is a tiny glass orb that glows various colors when casting a spell and she can make phone calls with her wand with tapping her wand and saying a beeping sound.

This wand could be 14 or 15' depends if you count the orb. Alex usually keeps her wand in her boot or other legwear. She is surprised that Tina could see her wand sticking out of her boot because most people don't. Her wand can access "Wand Apps" and can call other wands (like a cell phone).

Jerry Russo's first wand. Jerry Russo grew up with a now discontinued 77 wandcore feather light, it took the appearance of a magician's wand with a long black shaft and two white handles at each end. He later passed it on to his son Max to use while waiting for his E-Wand. Max jokingly said it looked like a prize from a cereal box. Later he sat on it and broke it accidentally because it was possibly between the sofa cushons in the lair.

Jerry's second wand was seen probably once or twice, it looked like it had a dark brown colored shaft and two lighter brown colored handles on each end like his first wand. He was seen being able to make phone calls with it even though he is a mortal. His brother Kelbo has the exact appearance as his brother's.

Justin's wand has been described as dark/light colored shaft with a tan handle. At the end of the handle is a dark brown ball that is usually where his pinky finger is positioned at. Justin's wand has been shown to make phone calls and carry many useful and non-useful applications such as Restaurant Locator, Spell calculator, Wand-to-lightsaber app, and Animal translator. Justin's best friend Zeke says it just looks like a cheap looking stick that always hangs out of his back pocket. Like Alex, Jerry, Max and Stevie's wands his wandtip also glows various colors when using magic. Justin's wand is tied in second place with Max's wand in the longest wand contest.

Stevie's wand is very similar to Alex's wand except that the shaft is silver and just a little bit longer, with a grayish handle and a dragon-like glass orb like Alex's wand at the tip

Kelbo's resembles a standard magician's wand with a dark brown colored shaft and two light brown colored handle and tip. Kelbo's wand is also foldable-like because he is seen when he casts a spell it bends in the middle of the shaft.

Max's wand is still on order in the first episode so he temporarily used his father's wand. He later broke it by accidentally sitting on it while searching for it. While Jerry went to get Alex, Max searches the wizard mail for the wand he finally gets it and opens it. It take the appearance of a straight long white shaft and around a part of the shaft near the handle are some black stripes that go around the shaft, it has an unusually small blue handle with a small blue ball similar to Justin's. Max's wand is called The E-Wand which is said to be the most popular type of wand that has been seen on screen.

Max's ewand has tons of features and abilities such as opening portals, disappearing objects, levitating objects and it also has a built in MP3 player with a trillion songs attached and an E mimic feature which allows him as long as there is a duplicate makes the actual person do the same thing the duplicate is doing like Egyptian dancing, hitting themselves, acting like a chicken and spinning extremely fast. Max has been seen to snap his wand many, many, many times throughout the series mostly by putting it in his back pocket and sitting on it once did it possibly on purpose in one episode he comes in saying " My collapsable wand isn't collapsing (snaps it) oh there it is" judging by what he said it was probably on purpose.

In Wizards of Waverly Place:The Movie, Max has a short brown wand as a replacement for the movie that he uses trying to conjure tigers but got goats instead. Max's wand is tied in second place of the longest wand contest with Justin's wand.

Felix initially using a ordinary wand. Later, he is revealed to be the descendant of the great wizard Rinaldi being the only one able to pull the wand Rinaldi of the crystal ball which had been sealed and becomes its owner. The Rinaldi wand is the most powerful wand in existence. It is shown that is larger and more ostentatious than other wands with a carved wooden handle, several jewels set around and a large diamond at the tip.

Alex's wand can be purchased at Amazon.com.

Max's wand from WOWP the Movie 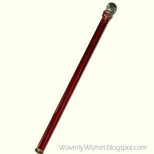 The Rinaldi wand
Add a photo to this gallery
Retrieved from "https://wizardsofwaverlyplace.fandom.com/wiki/Magic_wand?oldid=57242"
Community content is available under CC-BY-SA unless otherwise noted.