A magic wand is somewhat a source and a tool of a Wizard's magical powers. They are used to channel magical spells. During wandless magic, spells may not be as effective or strong as it would be with a wand. It turns out that if your wand is broken, its two halves can be placed together to perform some type of magic.

Wands are magical artifacts that enable wizards to channel raw magic from the Wizard Power Plants. By doing so, wizard fuel their own powers and enhanced the potency of their sorcery.

Each family of wizards has a "Family Wand", which is much more powerful than an ordinary wand and only a wizard who is a direct descendant of that family is able to use it.

The Russo's Family Wand is showed in Wizards of Waverly Place: The Movie where it is initially used by Justin and Alex who accidentally invoke its power to create an alternate reality where her parents never met.

The wand of Rinaldi family, currently in possession of Felix, is recognized as the most powerful wand in existence.

Training wands are low-level wands that allow young wizards to practice magic before they are old enough to use official ones. Each training wand displays one power to ease the complications.

Training wands can be used by anyone, even mortals.

Harper is given one with opening capabilities when she pretends to be a wizard to live in a hidden apartment.

Alex's wand is made up of a deep red colored shaft with a black handle. At the top of the wand, atop a small column-like carving is a tiny green glass orb that glows various colors when casting a spell and she can make phone calls with her wand with tapping her wand and saying a beeping sound.

This wand could be 14 or 15' (depending on if the orb is counted). Alex usually keeps her wand in her boot or other legwear. She is surprised that Tina could see her wand sticking out of her boot because most people don't. Her wand can access "Wand Apps" and can call other wands like a cell phone.

Justin's wand is made of dark-light brown wood, and tapers to a point. At the pommel, there is a small wooden ball. On the handle, Justin has wrapped a small strip of leather. Both the pommel and the handle are engraved with lines.

Max's wand is the exact same model as Justin's, except with a dark blue handle and a white shaft. Instead of a leather strip on the handel, there is a thick, shiny metal band.

Jerry Russo grew up with the1 now-discontinued 77 wandcore feather light. It took the appearance of a magician's wand with a long black shaft and two white handles at each end. He later passed it on to his son Max to use while waiting for his E-Wand. Max jokingly said it looked like a prize from a cereal box. Later he broke it accidentally when he sat down on the sofa, since it had fallen between the sofa cushons in the lair.

Jerry's second wand was seen probably once or twice, it looked like it had a dark brown colored shaft and two lighter brown colored handles on each end like his first wand. He was seen being able to make phone calls with it even though he is now a mortal. His brother Kelbo has the exact appearance as his brother's.

Kelbo's wand resembles a standard magician's wand. The shaft is a dark brown, while the handle and tip are both a lighter brown. Kelbo's wand bends, either due to being foldable or broken, as the middle of the shaft bends when he performs spells.

Stevie's wand is very similar to Alex's wand except that the shaft is silver and just a little bit longer. There are swirly dark silver lines along the shaft. The handle is turquoise. At the top of the wand a blue glass ball sits on top of a black, column-like carving.

Felix initially uses an ordinary wand. Later, he is revealed to be the descendant of the great wizard Rinaldi when he is the only one able to pull Rinaldi's wand out of the crystal ball in which had been sealed, and so becomes its owner. The Rinaldi wand is the most powerful wand in existence. It is shown to be larger and more ostentatious than other wands, with a carved wooden handle, several jewels set around and a large diamond at the tip. 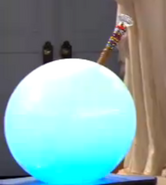 Stevie's wand
Add a photo to this gallery
Retrieved from "https://wizardsofwaverlyplace.fandom.com/wiki/Magic_wand?oldid=60709"
Community content is available under CC-BY-SA unless otherwise noted.