The Russo family lair a hidden lair where the Russo kids go to have magic lessons from their father, Jerry. The lair can be accessed from the Waverly Sub Station via the freezer or from the Russo's apartment. The lair has a portal to the wizard world which can be used as an entrance for visitors. The lair is also were the Russos keep Kelbo's magical and dangerous gifts to avoid Alex messing with them.

All wizard families have a family lair, and relocating it involves appealing to the wizard court and filling out a 4000 page form. Without a magic lair, wizards are unable to contact the wizard world. It's mentioned that it was Jerry's father who made the decision to put the family lair in the freezer of the Sub Station, but it's never said where it was before so it's unknown whether the next family wizard can move the lair without going through the full process.

Starting in the episode Alex Gives Up, Justin takes his delinquent class there. 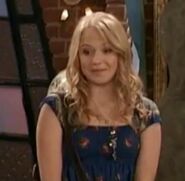 Justin and his delinquent class
Community content is available under CC-BY-SA unless otherwise noted.
Advertisement