"Justin's New Girlfriend" is the twenty-first episode of season two of Wizards of Waverly Place, and the forty-second of the overall series. It first aired on May 2, 2009.

Justin and Harper bond over a love for silent movies, in which Alex hates. Alex begins to think that they're dating, and wants to put a stop to it, so Harper is her friend with an obsessive crush on Justin and Justin is freaked out by her. Then when she gets what she wants, Harper and Justin both get mad at her. She tries to bring them back together again. Justin and Harper decide to get back at her by putting them in a silent movie (which Alex hates). Justin, Harper, and Alex run around in a silent movie. It ends with a man holding up a safe (with Justin under it) by a rope, and Alex tickles the man in the ribs making him let go of it and making it fall on Justin. Justin and Harper both become friends over silent movies and Alex walks away, tired.

Meanwhile, Jerry and Theresa both argue about whose job at the Sub Station is the hardest. They switch jobs, but then realize both are hard. Max, who wants to be a pilot, offers to help them for money. In the end, Max quits and they both return to their original jobs. 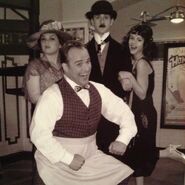