"Justin's Little Sister" is the 12th episode of season one of Wizards of Waverly Place, and the 12th of the overall series. It first aired on March 9, 2008.

When Alex gets annoyed that everyone is constantly comparing her to Justin, she makes a wish with a Genie that her family and teachers will stop comparing her to him. Instead, the Genie cons her, causing everyone except Alex to forget who Justin is. Alex messes up her last wish, turning Justin invisible. After explaining the situation to Jerry, Max manages to confuse the genie and she gives him one free wish, in which he wishes for the reset button, which allows them to reverse all damage done by the Genie.

Mr. Laritate opens History class by announcing that there will be an oral pop quiz - complete with questions that are phrased in a way to include the answers, which even then some students still seem to struggle to answer. However, when it's Alex's turn, Mr. Laritate poses a difficult and complex question which she cannot answer. Mr. Laritate then becomes disappointed and laments how Alex is definitely not like Justin, who could have easily answered the question. Alex is frustrated that she is being compared to Justin and starts complaining to Harper, who ultimately ends up comparing them without realizing it.

After complaining to Theresa about being compared to Justin at school Alex, Justin and Max have wizard training in the lair. Jerry brings out a genie's lamp and warns the kids that genies are con artists who do indeed grant wishes, but only once they've twisted them around. Alex is eager to get wishing, but Justin stops her and explains that letting a genie out of its lamp is dangerous, because once they are out, it's hard to get them to go back in. Instead, they use a spell to transport themselves inside the lamp. Once inside the lamp, the genie nearly tricks Alex into setting her free, but Jerry stops her just in time and Justin transports them out.

The next day, Alex sneaks into class early with the lamp and releases the genie. Alex wastes no time in making her first wish: "I wish people would stop comparing me to Justin." The genie grants her wish and Alex sets her free. When class begins, Mr. Laritate announces that they will be having another oral pop quiz and calls on Alex first. This time, the question he gives her is incredibly simple and Alex is able to answer it with ease. Mr. Laritate is impressed and praises her in front of the entire class.

After class, Alex and Harper are talking at their lockers. Alex gushes about how great it was that Mr. Laritate didn't compare her to Justin, to which Harper responds, "Who's Justin?" Just then a perplexed Justin joins them and explains that he was kicked out of Chemistry for not being on the class roster and that his teacher claimed not to remember who he was, even though he's been in the class all semester.

Justin walks away and Harper begins to gush over how "H-O-T" the new guy Justin is. Alex is confused and reminds her that it's just Justin, her dorky brother, but Harper insists that Alex only has one brother, Max. With horror, Alex realizes that something with the wish must have gone terribly wrong.

After realizing that none of his friends remember him either, Justin confronts Alex, who eventually admits that she made a wish that everyone would stop comparing them. Justin tells Alex that she had better go and tell the genie to take the wish back, but Alex says that she let the genie go. Angry, Justin states that they're going to have to ask for Jerry's help.

At the Sub Station after school, Justin and Alex realize that Jerry, Theresa, and Max have forgotten Justin as well. Alex manages to talk to her mother until allowing Justin to stay with them for a while, pretending they are friends. Justin tries to jog his parents' memories by talking to them, and while he certainly earns their approval, neither Jerry or Theresa give any indication that they remember he is their son.

Later, Alex says she wishes that the genie would come back. Without realizing it, this is actually her second wish, and the genie returns. Justin warns Alex that she must word her third wish very carefully, but Alex blows him off and says she's confident she'll get it right. She makes her third and final wish: "I wish everyone would see Justin clearly for who he is." However, far from reversing her damage, this only succeeds in turning Justin invisible. The genie leaves again.

Alex tries to get Justin to look on the bright side and tells him that now he can go get revenge on the people who have wronged him. Justin doesn't find this amusing in the least and tells Alex that she's ruined his life. He then begins to undress, realizing that if he's going to be able to hide out in the house, he can't walk around looking like a set of floating clothes.

Jerry comes downstairs and asks Alex where her new friend is. Alex tells him that Justin is the bathroom, so Jerry sits down on the couch to wait for him to come back, saying that he wants to talk more sports. Alex panics, afraid that Jerry will sit on the invisible Justin, and begins to act very strange. When Jerry does almost sit on Justin, Justin gives him a kick in the behind, and Jerry realizes something weird is going on. He demands that Alex tell him what's up.

Alex admits that Justin is invisible. The commotion draws Theresa downstairs. When she takes note of the situation and realizes that the naked Justin is holding her "good pillow" as a shield, she too demands that Alex explain what's going on. Alex explains that Justin is her brother and Jerry and Theresa's oldest son. They don't believe her, but she insists. Alex goes on to say how she made a wish to the genie that people would stop comparing her to Justin, but the genie took her wish and twisted it and made it so that one, everyone forgot Justin, and two, he turned invisible. Alex becomes upset when her parents still don't believe her story, but Theresa softens when she realizes how desperate her daughter is, and Jerry notes that genies are very sneaky. They begin to believe her, but Jerry admits that if Alex used all her wishes and the genie outsmarted her, then the genie is gone for good and there's not much anyone can do.

Justin leaves the room to put on some clothes and Max enters. Alex comes up with a plan, stating that if the genie can outsmart them, maybe they can "out-dumb" her. She asks Max how he would draw a genie back to her lamp. He says orange soda, obviously, because if someone poured orange soda in his room he'd be really mad. Theresa realizes this is an admission of guilt and marches up to his room to clean the mess. Max points out that his logic was right: "See? She's really mad and she's going to my room!"

Jerry, Alex, and Max proceed to pour orange soda into the genie's lamp. Just then, the genie appears, angry at them for messing up her house. Alex manages to talk the genie into giving Max a wish, threatening her that she will continue to mess up her house if she doesn't comply. The genie agrees and Max wishes for his exact haircut and the shirt he's wearing. The genie is annoyed and tells him she can't give him exactly what he already has. Max further annoys the genie by telling her he wants to play the Genie Game. She claims to not know what he's talking about, so he continues to pester her until she accidentally mentions a Reset Button.

They demand that the genie take them into her lamp and show them the Reset Button. Inside the lamp, everything is covered in orange foam. The genie begrudgingly shows them the button and Max presses it.

Back outside the lamp, Justin is returned to his normal self and Theresa apologizes for forgetting him. She, Jerry and Max go off to bed. Justin is touched that Alex was so upset when he was invisible and begins to playfully mock her. Alex tells him she's glad he's back, but only so that she has someone to beat up on, and hits him with a pillow. 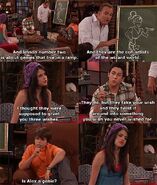 Add a photo to this gallery
Retrieved from "https://wizardsofwaverlyplace.fandom.com/wiki/Justin%27s_Little_Sister?oldid=62696"
Community content is available under CC-BY-SA unless otherwise noted.