"Justin's Back In" is the nineteenth episode of season four of Wizards of Waverly Place, and the one-hundredth of the overall series. It first aired on August 26, 2011.

Justin can get back in the wizard competition if his class of delinquents passes their final test to get back into Wiz Tech. Meanwhile, Jerry, Theresa, and Harper try to recreate Max's childhood memories.

The episode begins in The Lair with Justin explaining to his delinquent class the problems of wand functions. Then he announces that's their last class. At that moment Alex comes through the portal and explains that she's the new Wizard Teacher Assistance much to Justin's frustration.

Later, at the loft, Harper is making a memory book. Jerry asks Theresa if they had made memories books for their kids and she points to three boxes with each of the Russo sibling's names. They discover that Max's box has nothing but the receipt for the three memory boxes. The Russo parents decide to reproduce all of Max's achievements because they never kept the original ones.

Later at the Hall of Wizards, the delinquent class is making their last test: they had to detect and name the various artifacts within the Hall. The delinquent class is fascinated with the Aquarium, which is actually a magically-contained endless waterfall, and the famous Wand in the Crystal Ball, which one of the delinquents, Felix, states once belonged to the great wizard Rinaldi. Rinaldi's wand, the most powerful wand in the Wizard World, was stolen by a jealous warlock who then plunged it into the crystal ball; legend states that only a descendant of Rinaldi can free it. Justin adds that the catch-22 of the legend is that there are no known descendants (although that doesn't stop him from taking a crack at it himself). Then Professor Crumbs and the courier named Cragmont flash in. Professor Crumbs is happy to see Justin there and says that one day he might have his own statue in the Hall. After Crumbs leaves, Cragmont says to the students go to the chairs in the bottom of the Hall, which are enchanted so they can reveal the students' knowledge.

Later back at the lair, they're informed that they failed. Justin blames Alex for the failure, saying that she did all that just to make sure Justin could not return to the competition. Alex leaves and says that she will figure it out what happened. Alex returns to the Hall of Wizards and enters Cragmont room to get the test file. She finds out that the file says that they won. When Alex is trying to contact Justin, she's discovered by Cragmont. Alex tries to flee but Cragmont captures her. As her punishment, Alex is held as a prisoner in the Waterfall of Wickenberry. When Justin and the delinquent class attempts to save Alex they're quickly defeated by Cragmont who turns Justin into a statue and destroys the class wands.

However, in a moment of desperation, Felix grabs and removes the Wand in the Crystal Ball, causing a crack of thunder to be heard across the Wizard World, proving that he's a descendant of Rinaldi. He uses the powerful wand to release both Alex and Justin. Crumbs shows up and turns Cragmont into a talking history book. Crumbs, now informed about the test true outcome, announces that the delinquents can now return to WizTech and Justin is back in the family wizard competition.

In the ending credits, Max reveals that he had kept mementos himself of all his favorite memories in the top bunk of his bunk bed, although he thought it was nice of them to recreate all of them for him. 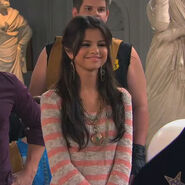 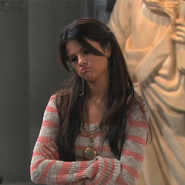 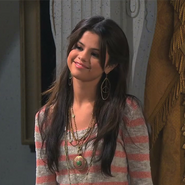