Journey to the Center of Mason

"Journey to the Center of Mason" is the fourth episode of season four of Wizards of Waverly Place, and the eighty-fifth of the overall series. It first aired on December 17, 2010.

After losing her wizard powers and becoming mortal, Alex can no longer date Mason, so they decide to try being best friends instead. But when Alex’s old boyfriend Dean reappears, Mason has a hard time keeping his jealousy in check. When Mason accidentally eats Dean, Justin, Max, and Alex go inside Mason to find him. After Dean is rescued Alex tells Dean that she is back with Mason. Alex then decides to get back in the wizard competition to be together with Mason. Meanwhile, Justin tries to motivate his class of delinquent wizards to get back on track at WizTech.

Since Alex has decided to quit her family wizard competition, she knows it's only a matter of time when the competition is over and then she will lose her wizard powers and become a mortal. Because of this, Alex is no longer allowed to date her former werewolf boyfriend, Mason. So they decide to be best friends instead. But when Dean, an old boyfriend of Alex's, comes into the picture, Mason secretly has a hard time keeping his jealousy in check. Dean comes on strong to Alex by asking her to kiss him, and he leads Alex into the Waverly Place Street by a rose petal path which leads to a Skee Ball machine and Dean eager to compete with her. Mason is watching them play from inside the Sub Shop when he comments to Max that he thinks Alex might have feelings for Dean. Max being Max responds that Dean might have feelings for Alex too. Mason is raging with jealousy when Dean decides to go inside for refreshments. Minutes later Alex witnesses growling and flashing from inside the Sub Shop.

When she goes inside she finds Mason as a werewolf and by his sudden "burp" she learns that he ate Dean and Max used the shrinking spell to make him go down easier. Alex and Mason quickly go to Justin who is in the Lair teaching his class of delinquent wizards the “Up n’ Atom” spell. Tyler, one of delinquents wizards, suggest that they shrink themselves with the “Up n’ Atom” spell and jump in Mason's stomach until he barfs up Dean.

While in his body they travel into Mason's brain, where Alex sees that she is always on his mind. After Dean is saved and Alex gives a cover story why he's plastered in Mason's breakfast, Dean tells her that he would like to be in a relationship again. She refuses because she says Mason is her boyfriend. After Dean had left, Mason reminds Alex that they cannot be together, but Alex tells him that she has decided to re-enter the Wizard Competition so they can be together forever. 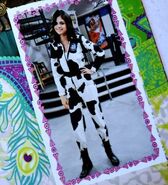