"Halloween" is the second episode of season three of Wizards of Waverly Place, and the fifty-third of the overall series. It first aired on October 16, 2009.

The Russo's haunted house has been lame every year, because Justin insists that they focus on safety. The person in charge of the haunted house threatens to take it away if it's not scary. Alex then goes to the wizard world and gets three real but kind of lame ghosts, following her dad's orders. But, they aren't scary enough at first, Teresa thinks they're just people in masks. Alex and Harper go back to the wizard world and get 'Mantooth' the scariest ghost from the wizard world who used to scare Justin at night. Mantooth does something with his face that scares the children so badly that they flee the house. Mr. Evans immediately declares that their haunted house is too scary and takes it away anyway. 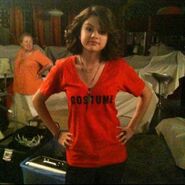