"Fashion Week" is the 13th episode of season two of Wizards of Waverly Place, and the 34th of the overall series. It first aired on February 15, 2009.

At the beginning of the episode, Jerry lets Alex and Justin know that the Wizard World is experiencing rolling blackouts. Since someone in the Wizard World left the door open in the Wizard Power Plant, and the dragons that are the source of their powers have escaped. So for Alex and Justin, their powers are temporarily out. Alex tricks Harper into letting her take care of the one of a kind dress that Harper's new boss, Mr. Frenchy, designed for fashion week. But Alex wears the dress, and she gets caught by Justin in her room. She then drops his tray of food on him. And in retaliation, he hugs her, ruining the dress. Alex must figure things out on her own since magic is gone.

Meanwhile, Justin and Zeke try to find a way to pick up the models that are in the fashion show. Later, Alex tells Harper that the dress is ruined. Minutes later, Mr. Frenchy tells Harper that his fashion show is double booked. Alex is with Harper at the time, so she asks Mr. Frenchy if he would like to have it at the substation. Justin and Zeke take advantage of the models staying at the substation by getting them to play Dungeons & Gargoyles with them. But the models accidentally get food poisoning from eating bad sandwiches Jerry made a couple of days ago but lost them. Magic comes back so Alex can finally set things right. She first uses a magic copy machine to bring to life an image of famous model Bibi Rockford from a poster she took from Justin's room and then she uses the machine on a picture of herself while wearing the dress, so Bibi can now wear it. However, when Bibi meets Justin and Zeke, she begins playing Dungeons & Gargoyles with them and she doesn't feel like doing the fashion show. Alex tries to convince Justin to end the game of Dungeons & Gargoyles, which he agrees if Alex returns the stuff she took from his room to which she complies to. After Justin ends the game of Dungeons & Gargoyles, Alex gets Bibi to reluctantly do the fashion show, but only if Alex does it too. At first, Alex refuses, but then Harper fakes tears so Alex will do it.

During the fashion show, Mr. Frenchy is impressed that Bibi is in his show and decides to keep Harper around. The episodes ends with Bibi and Alex modeling on the runway. 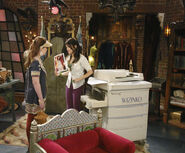 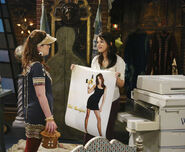 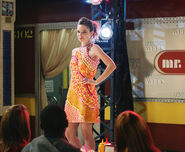 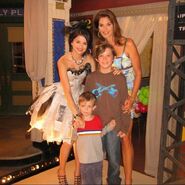