"Everything's Rosie for Justin" is the seventh episode of season four of Wizards of Waverly Place, and the eighty-eighth of the overall series. It first aired on February 4, 2011.

Justin's delinquent class is informed that they will have to perform and pass a wand drill if they want to get back into WizTech. The class then gets a new student named Rosie, with whom Justin falls in love with. Unlike the other students, Rosie can't perform the simplest of spells.

Meanwhile, the Sub Station implements a reward punch-card system to try and boost business. However, it turns out to be a poor decision when an amoral customer punches out the rest of the card himself and forces them to give him a free sandwich, and feigns ignorance when they try to call him out on it with the threat to report them if they don't honor the ticket. This only gets worse when 'other' customers start to do the same. Eventually, Maxine uses her cute face to guilt the customers into not scamming her parents, claiming that if they did so, her parents would be unable to afford bows for her hair.

At Alex's insistence, Justin kicks Rosie out of the class and the others manage to perform a successful wand drill during rehearsal. Alex discovers that Rosie has a crush on Justin and invites Rosie back to class, using the Copycat Spell so that Rosie would pass the wand drill. However, after a squirrel frog attaches itself to Alex's leg, the drill is ruined and Rosie is revealed to be an angel, thus explaining why she is unable to perform magic. Alex apologizes to the class for bringing Rosie back, explaining that not many girls like her brother, while Felix states that they're all delinquents used to failing anyways and that on the bright side, Justin gets to date an angel. 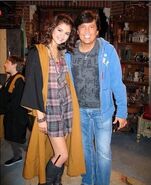