"Doll House" is the sixth episode of season three of Wizards of Waverly Place, and the fifty-seventh of the overall series. It first aired on November 20, 2009.

After Harper moves in and Alex's art studio gets taken down, Alex finds her old doll house, Alex decides to shrink herself down to fit inside of it and use it as her own personal art studio, but Jerry and Theresa accidentally give the doll house away, with Alex still in it and attempting to think of a solution. Meanwhile, Justin tries to sell his "Captain Jim-Bob Sherwood Farmhouse Space Command Module", which is worth $400.

After Harper finds out that her family is moving away, the Russo's offer to let Harper live with them. While Alex and Harper clean out the basement to make room for Harper's things, they find Alex's old doll house. Alex shrinks herself down to fit in the doll house to use as her own art studio, but Jerry and Theresa head down to the basement and find the dollhouse, unaware that Alex is in there. They grab the dollhouse, and take it out to the street, where they end up giving the doll house away to a little girl named Olive, with Alex still in it. Meanwhile, Justin tries to sell his "Captain Jim-Bob Sherwood Farmhouse Space Command Module" to Randy, a collector. While Alex is in the doll house, Olive dresses her up into a girly doll. Alex tries to get away before Olive picks her up and starts brushing her hair, causing Alex to struggle even more.

Harper, unsure of what to do, is still trying to get her hands on the dollhouse. In the meantime, Max thinks Justin should have a bidding war to sell his "Space Command Module". Max acts as an interested party and Randy, who initially offered $75, ends up buying the command module for $400. Eventually, Justin buys the house back from Olive for $400 and gets Alex out. However, Max sells a paper plate with trash to Olive at the end of the episode, and ends up with Justin's $400. 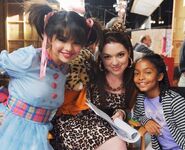