"Crazy 10-Minute Sale" is the first episode of season one of Wizards of Waverly Place, and the first of the overall series. It premiered on October 12, 2007.

Production Code for this episode was 102

Alex wants to go to a Crazy 10-Minute Sale, an annual sale which lasts for ten minutes and every item is so cheap, it’s almost free in order to get a jacket she wants at a very low sale price, but her dad won't let her because she has wizard class that day. However, after duplicating herself using the Edgebono Utoosis spell, she leaves her clone at wizard class.

However, the clone will not talk, and instead barks like a dog. Alex's plans to find the jacket change when Harper informs her that her mom is at the sale with her, and Gigi, her enemy, hides the jacket. When Alex’s dad finds out she skipped class, he goes and gets her. While he is gone, Max gets a new wand and makes the Alex clone dance around. Whatever Max does to the clone using the E-Mimic feature on his wand, Alex does the same thing, exposing her clearly to her mom and dad. Alex exposes Gigi's real name in order to get the jacket.

In the lair, the Russo kids are in the middle of a wizard lesson on duplication spells. Using Edgebono Utoosis, Justin duplicates a rabbit. Jerry praises him for doing such a good job that he can't tell which is the real rabbit anymore. Suddenly, the cloned rabbit barks; much to Alex and Max's amusement. Justin admits that he was thinking about dogs when he cast the spell. Alex becomes distracted, and begins excitedly talking about the Crazy 10 Minute Sale, and how she has to go because Gigi Hollingsworth, her enemy since kindergarten will be there. Jerry turns down her request to skip the wizard lesson that day to attend. When the question portion of the lesson resumes, Alex takes the opportunity to ask how she can use the spell to get cool clothes before Gigi.

At school the next day, Harper is bursting with excitement over the Crazy 10 Minute Sale. Alex begins conjuring up a plan to sneak away from the wizard lesson that day. As they're talking, Gigi and the Wannabe's approach them. Gigi leads the way and begins to taunt Alex saying she can't have the one-of-a-kind jacket she knows Alex has been eyeing. All the girls start sniping at each other, mentioning the Wannabes' nose jobs and Alex's man hands. Gigi announces that she hid the jacket, and then pours nose wound gel on the floor, saying Alex had an accident (the same thing she did to Alex when they were in kindergarten), and everyone laughs at Alex.

In the kitchen of the Waverly Sub Station, Jerry is asking Theresa to back him up on his decision to not allow Alex to go to the sale. Meanwhile, Justin and Max are checking the wizard mail. Max is disappointed that his new E-wand didn't show up. Jerry offers Max his own old 'Black Liquorice' wand, however, Max is unimpressed with it, stating it looks like something you would get in a cereal box. Eventually, Max takes the wand.

Later, in the lair, Max is on his Nintendo D.S., when Alex approaches him asking about her appearance and duplicating herself. Justin walks in not surprised by the two Alex's. Alex sits the duplicate on the chair, when the duplicate barks, Justin laughs at Alex saying that is what he hears when she talks to him. Harper calls telling Alex to hurry up and sneak away. Alex asks Max to cover for her because she'll buy him some sneakers.

At the same time, outside the Suburban Outfitters, Theresa goes over to Harper, who sends Theresa to find a tappuccino. Alex finds Harper, who explains about Theresa. Alex is impressed. Alex pushes to the front, teasing her for bringing an old woman. The doors open. Gigi runs over to where she hid the jacket and asks the Store Manager where it is. The manager explains that they completely rearrange the store before the sale. Meanwhile, Theresa comes in with the tappuccinos, Harper hides.

In the lair, Justin pushes the duplicate Alex over, and Max can't get her up. Max sits on the 'Black Liquorice' wand. He starts to get worried about what his dad will say. He tries again to get the duplicate up and manages to prop her on his shoulder. While he is doing this, Jerry walks in, Max lies that they are Rehearsing for the new reality show Dancing with my Sister. Max sits her down, and Jerry says she can leave for the sale, offering the duplicate money. When she does not move, Jerry realizes what Alex has done. Max tells his dad he broke the wand, and after deliberation, Jerry leaves for the sale. Justin says he should have mentioned that he broke Jerry's new drill.

Meanwhile, while in Suburban Outfitters, Theresa is looking for Harper, and Alex, who is with the latter, hide in a pile of clothes. Harper pushes the tappucino's out of Theresa's hand, obviously intending to send her away for more. However, when the Store Manager there is only eight minutes left of the sale, Theresa starts to look for clothes in the pile that Alex is hidden in. Harper, panics, grabs a handful of clothes and shoes and sends Theresa away to the dressing room with them. Alex, then clambers out of the clothes, Harper wants to leave, but Alex is determined to find the jacket. Theresa comes out of the dressing room looking confused, and Alex hides again.

In the lair, Max's new E wand arrives, and Justin reads the list of what it can do. Max uses it to make the duplicate hit herself. In the shop, the real Alex is doing the same thing, much to Gigi and the Wannabes bewilderment. When Alex starts walking like a chicken, Gigi thinks it is because the jacket is near. Next Alex starts dancing like an Egyptian and wants to know why she is involuntarily dancing. However, Alex stops dancing and Gigi announces that there's a freak show by the jeans rack. Alex briefly does Indian dancing and starts spinning wildly out of control. Back in the lair, Max is trying to make the duplicate Alex throw up by spinning it around. In Suburban Outfitters, Alex hits some shoes. Jerry walks in and talks to Theresa. Alex whizzes between them and falls into a pile of clothes. Jerry guesses Max got his new wand. Alex emerges with the jacket in her hands and mocks Gigi, who snatches it of her. Gigi hits the old woman she brought in at the start, and a drink spills down Gigi's front. Assuming that she had an accident, the Wannabes leave in disgust. Before Jerry and Theresa take Alex home, Alex announces that Gigi's real name is Gertrude. The Manager mutters that these sales get crazier and crazier every year.

In the lair, Jerry asks Max if he got his new wand, and explained what he was doing to the duplicate was happening to the real Alex. To get out of trouble, Max points out what he did wasn't as bad as what Alex did. Alex mentions that Justin broke his drill, and Justin mentions that Max broke Jerry's old wand. After asking the boys if they used magic to break his things, he lets them go after they said "No". Jerry tells Alex to duplicate her punishment, telling her that she's grounded for 1 week. Alex asks if she's grounded for 2 weeks, and then Jerry makes it 4 weeks.

At the very end of the episode, Jerry asks Alex to duplicate him, so he can watch the big game, and go dancing with his wife. 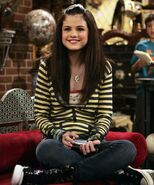 Add a photo to this gallery
Retrieved from "https://wizardsofwaverlyplace.fandom.com/wiki/Crazy_10-Minute_Sale?oldid=61644"
Community content is available under CC-BY-SA unless otherwise noted.