Conscience (Moises Arias) was Max's inner-thoughts of right and wrong who was brought into human form after Max performed a spell incorrectly. He claims to be what Max looks like to others, and dresses like Max except with his shirt buttoned up and with a tie.

He and Max have a comical relationship which revolves around Max not being able to understand what Conscience is teaching him, which has led to incidences such as Max releasing Monsters into New York City. He tutors Max and gets him ahead in his wizard studies. Being an extension of Max, leaving him for too long would make Conscience become his own person and leave Max permanently, causing Max to do only the wrong thing.

He returns to Max's self-conscious in "Night at the Lazerama", but not before he became his own person and received his own conscience (Adam Irigoyen). When he and Max first met, Max insisted on calling him Roy, and even told him to say his name was Darren if anyone else asks. He also calls him Gordon once, probably forgetting what he actually called him. He is later called a "dummy" by Alex, but she thinks that he is ruining her chances at being the family wizard, though her own laziness is more likely the actual cause of that.

Conscience has become his own person 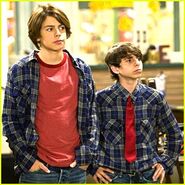 Max and his Conscience