"Maxine's about to fade out of existence!"
―Alex Russo

"Back to Max" is the eleventh episode of season four of Wizards of Waverly Place, and the ninety-second of the overall series. It first aired on March 11, 2011.

Justin invites Professor Crumbs to check on his class of delinquent wizards, to see how they're doing with their wizard training. During the conversation, Maxine interrupts.

So now they're faced with a new hurdle, to find a way to erase Maxine's existence before she can beat up Professor Crumbs. Maxine takes Harper's solo in the play, singing "Home on the Range"

Meanwhile, Jerry and Theresa are signed up by Harper to be on the decorating committee. Laritate puts them on streamer patrol, but Theresa claims they can do better, so they buy a bunch of little plastic flags. Laritate says they are the lazy parents who didn't make anything, unlike the Carbonaro's who built a cannon. They have an idea to put confetti in the cannon for a big grand finale.

When Crumbs shows up, they freak out and try to cast a spell on Maxine to erase her existence, before she punches Professor Crumbs, but another crossed spell happens and Crumbs is turned into a 10-year-old boy. He says there is a potion to fix crossed mutant spells, but he is having so much fun as a little boy he won't reveal the ingredients. Later Alex tricks Crumbs into revealing the ingredients, before tricking him into drinking the potion. Alex convinces Maxine to drink the potion.

At the end of the episode, Max tells Crumbs about Maxine's existence being limited, due to her being an artificial being. Crumbs replies that they turned him into a little boy but that the two managed to reverse it, which makes them splendid, and leaves. Alex and Justin are stunned that Crumbs is not angry at them nor did he punish them. Alex then grabs Max's hand and decides that they should celebrate with a pizza party dinner. 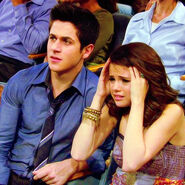