"Baby Cupid" is the 10th episode of season two of Wizards of Waverly Place, and the 31st of the overall series. It first aired on December 14, 2008.

Jerry and Theresa’s anniversary plans are ruined over a fight about magic which prompts Alex to order Cupid from the World Wide Wiz Web. Cupid’s return gets delayed after Max accidentally breaks his bow and his arrow then strikes Justin which prompts him to fall for Harper. Justin then goes shows his love to Harper (by hugging, wearing the sweater she made him out of her own hair, impressions with French, deciding to join the scrapbook club) which at first she enjoys, but later she can't stand him and wants him to return to normal.

Just before Jerry and Theresa's anniversary, Alex and Max play a magic video game which results in Theresa's lamp being broken. A huge fight between Jerry and Theresa ensues and Theresa starts ignoring Jerry. Alex decides to help her parents by ordering Cupid to shoot Theresa with a love arrow. Justin then chides Alex for doing so by saying "Mom's mad that we were using magic in the house, so naturally you bring more magic into the house." Alex then says that she's going to cancel Cupid but Justin told her that Cupid cannot be cancelled once he has been ordered. He will only leave when he has completed his mission. When Cupid arrives, Max accidentally breaks Cupid's arrow. Without the arrow, Cupid is unable to shoot Theresa. Alex, Justin, and Max decide to lock Cupid in the lair.

At this moment, Theresa walks into the kitchen and asks what they are up to. Cupid makes a weird noise and Max imitates it saying that he has a terrible stomachache. Theresa then brings him upstairs to make him some tea. Alex and Justin try to figure out what to do with Cupid. Justin goes upstairs to help Max fix Cupid's arrow while Alex brings Cupid out of the lair. Harper comes into the sub shop and shows Alex a sweater she just made for Justin. Alex comments that it smells like shampoo and Harper tells her that it is made entirely of her hair. Alex tells Harper that Justin is upstairs fixing Cupid's arrow. Harper then proceeds upstairs.

Justin and Max finished fixing Cupid's arrow just before Harper comes up. Max plays with the arrow and accidentally shoots Justin with it. Justin then falls in love with Harper. Alex comes up and asks Max what he has done and tells Harper that Justin is only behaving this way because Max accidentally shot him with Cupid's arrow. Harper says that she does not mind and goes on a date with Justin. At this moment, Jerry comes home with a bouquet of flowers asking where Theresa is. Justin takes the flowers from Jerry and gives it to Harper.

Jerry asks why is Justin acting so strangely and sees Alex holding on to a baby and then he realizes that it is Cupid. Jerry reprimanded Alex to use magic to solve a problem that started because she used magic. Theresa comes upstairs and asks why does Alex have a baby. Alex lied and said that it was a baby doll from her marriage and family class. Theresa is delighted and wants to meet Alex's marriage and family class teacher during their open house on Friday. She sees Max with Cupid's arrow and breaks it because it is dangerous for him to play with arrows.

Back in school, Justin continues to wear Harper's hair sweater and they start to hang out very often. Zeke sees this and makes fun of Justin. Justin gets angry and gets into a water balloon fight with him. Meanwhile, Alex tries to get into marriage and family class and is unsuccessful. Harper starts getting annoyed with Justin because he started becoming very clingy and she does not have any time on her own and that she is unable to live like this forever. Cupid then tells Harper that love from his arrow is only temporary. The next day, the spell from Cupid's arrow breaks and Justin returns to his normal self.

During the open house, Max goes to the woodshop to fix Cupid's arrow and Theresa goes to Alex's marriage and family class. Jerry and Alex meet her there. Max brings Cupid's arrow to the class and Cupid shoots the arrow at someone else instead. Max balanced the arrow and Cupid was unable to aim at Theresa properly. The arrow was shot at another lady who falls in love with Jerry and Theresa gets jealous. Jerry and Theresa talk things out and stop fighting. Back home, Theresa sticks the arrow in herself to let Cupid leave. 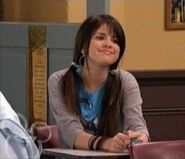 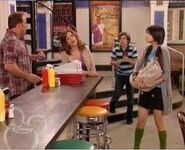