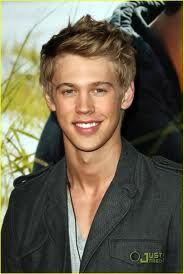 Austin Butler portrays George in the episode, "Positive Alex", and also starred in Aliens in The Attic In 2009. He acts as George, Alex's crush, who conducts the school's band and finds Alex negative until she uses a magic marker to write positive on her arm. This makes her become a positive person.

Retrieved from "https://wizardsofwaverlyplace.fandom.com/wiki/Austin_Butler?oldid=66477"
Community content is available under CC-BY-SA unless otherwise noted.