"Art Teacher" is the 15th episode of season two of Wizards of Waverly Place, and the 36th of the overall series. It first aired on March 1, 2009.

Alex turns TJ's ex-girlfriend back to her normal age as T.J (who is a wizard) changed his girlfriend to a 40 year old woman who was going to Alex's school and teaches art there after she was cursed. However, with Ms. Majorhealy back to being a teenage girl, she resigns her teaching job and art class is canceled, much to Alex's concern.

Meanwhile, Max pretends to have a fake disease called 'mono-orangosis', after which he gets visited by celebrities, Misty-May Trainer and Dwayne Johnson out of sympathy. Misty's niece Chelsa, however, later reveals that there is no such disease and they both leave. 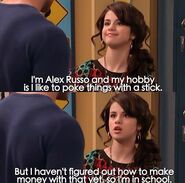 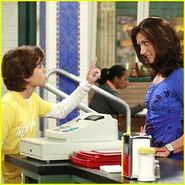