"Alex's Choice" is the seventh episode of season one of Wizards of Waverly Place, and the seventh of the overall series. It first aired on November 16, 2007.

Gigi invites Alex and Harper to her annual tea party which Alex tries to convince Harper not to go to. Alex learns that Gigi plans to embarrass Harper, so she uses her magic to get back at her and save Harper from humiliation. Meanwhile, Justin and Max send out prank mail, including one where they claim they're lost on an island in the "Lava Sea," and they receive unwanted help from emergency wizards.

Alex finds Gigi and her copycat crew behaving suddenly nice to her and Harper, giving them invitations to her tea party. Though Harper believes it, Alex is convinced that Gigi is up to something. She overhears Gigi's plans to embarrass Harper at her tea party, but Alex is unable to prove this to Harper because she used magic to figure this out. Alex decides to go to Gigi's party with Harper as Harper is still convinced that Gigi has become good.

When Alex goes to the party, she uses a Truth spell to make Gigi tell the truth about her tea party, but all the girls at the party start telling embarrassing secrets about themselves (such as one girl saying, "If my parents could afford the same dermatologist as Gigi, I'd be way prettier than her"), including Alex, who accidentally reveals that she's a wizard, but manages to cover up for it, so no one believes that she really is one.

Alex gets Gigi to admit why she had the party in the first place: Gigi reveals that the party itself is actually a "Who Could Bring the Biggest Loser?"-contest and Gigi had brought Harper, who was about to be crowned the winner. Gigi also reveals that she actually thinks her friends are bigger losers than the people they brought (to which Alex says, "Wow. Gigi thinks you guys are bigger losers and you're supposed to be her best friends"). Gigi's friends then dump a chocolate cake and a pitcher of tea on her, one of them saying, "It's time that Gigi got a taste of what she's been dishing out to all of us for years." When Alex feels that Gigi's had enough, Alex asks Harper to make Gigi wear the Biggest Loser-crown.

Meanwhile, Justin and Max send prank mail, claiming that they're lost in "The Lava Sea," but they receive unwanted help from emergency wizards. The emergency wizards come to interrogate Justin, Max and Theresa, and the three of them are later sentenced to community service, in which they wash the wizard cop's laundry ('they're part of the community').

Ear of a Bat spell 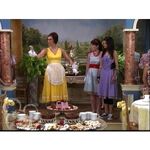